The worsening plight of the poorest Christian families in Damascus

“Here in Damascus, everything has become so expensive!” So says Sister Joseph-Marie Chanaa. “The worsening plight of the people has forced me to get involved in the social sphere in order to help the poor and the suffering”, she adds – for originally she worked as a catechist. A member of the congregation of the Sisters of Charity of Besançon in France, Sister Joseph-Marie has been working ever since the war in Syria, heading a group of 16 people engaged in helping the poorest Christian families in Damascus – thanks not least to the support from Aid to the Church in Need (ACN International).

The civil war in Syria is now in its 10th year and the social need throughout the country has only continued to grow, she laments. According to UN figures, in 2019 some 83% of the Syrian population were living below the poverty threshold. And although the bombs have stopped falling on Damascus itself, the civilian population is continuing to pay the price for the conflict and for the subsequent economic sanctions, which are limiting the revenue of the state and thus cutting the funds available for paying the salaries of public service workers, which in turn is leading to growing impoverishment among many families. And what is more, the general destruction and contamination of the agricultural infrastructure and the subsequent supply chain, such as markets and bakeries, the lack of productive employment and depletion of people’s savings, the growing debt and limited economic opportunities, have all combined to compound the social and economic difficulties and at the same time have forced rental prices still higher. It is a crisis that has no more spared the many Christians in the capital than it has the rest of the population. 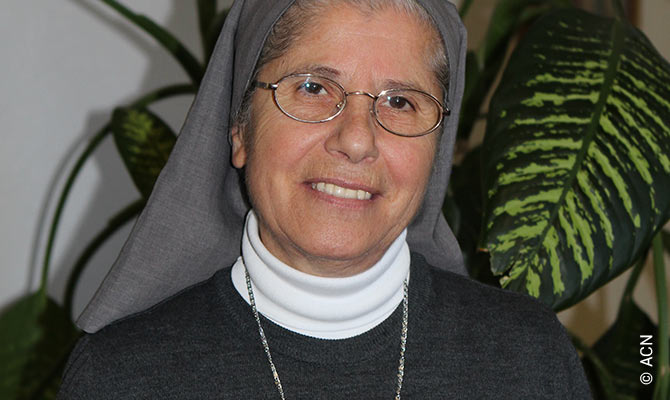 In Damascus the cost of renting a small two-roomed apartment with a sitting room and kitchen has increased to an average of around 60,000 Syrian pounds, or over 100 Euros. Sister Joseph-Marie cites the example of a family in which only the father has work, earning a salary of 80,000 Syrian pounds (140 Euros). This means that he has barely 20,000 Syrian pounds, or €40 left for his family to live on. To give some idea of prices, the cost of a sandwich is around £1000 Syrian, or €1.7 – “a very high price for Syrian conditions”, she explains.

In order to be able to help the poorer Christian families to continue to live in Damascus and its suburbs, Sister Joseph Marie and her team of helpers are able to provide a subsidy representing approximately a quarter of their rent, thanks to the financial support from ACN International. This is just enough to enable the families to be able to remain in Syria and live a modest but decent existence. “Generally speaking, the people who were able to emigrate were those who had enough money to be able to do so. Which is not the case for the people still living in the country, whom we are helping with their rent. There were only five or six families who left the country around the middle of the year 2019 – 2020”, Sister Joseph Marie tells ACN.

Rental costs are not the only things that have risen, of course. The price of heating fuel and other basic necessities has also risen. As a result many families are tempted to stop sending their children to higher education in order to avoid having to pay the “hidden costs” involved, such as travel costs and photocopies. So in order to prevent young people dropping out from education, ACN has decided this year to support 550 students at Damascus University. “This is an important project, because we are helping Christian students, of whatever denomination or rite, to continue their studies by helping them to pay for public transport and photocopies of their coursework” says Sister Joseph-Marie, who is also in charge of organising this scheme locally.

Many of the students are very grateful for this help. Sister Joseph-Marie never ceases to be moved by the grateful words she so often hears from them: “Sister, I don’t know how to thank you. Your help is so precious.”

What makes her particularly happy is the fact that, by and large, they want to stay on in Syria and not emigrate, except in order to specialise and then return again afterwards. To those who are nevertheless tempted to emigrate, especially in order to escape military service, she always says the same thing: “Of course, we don’t know the future, but you should stay on and serve your country, and the Church will help you to do so.”

Nor have war and its aftermath spared the sick and those suffering from chronic conditions such as diabetes, hyperglyceridemia or high cholesterol conditions. Needless to say, the poorest are the hardest hit, since they cannot afford the cost of their treatment – especially given the threefold increase in the price of most medication since 2016 and the lack of availability. Many pharmaceutical outlets and medical storage facilities were destroyed during the war. So there are fewer and fewer pharmaceuticals available and people are increasingly forced to seek help from the Churches and charitable agencies. In the areas under rebel and Turkish army control the international agencies provide emergency help. However, in the areas under Syrian government control, as in Damascus for example, these agencies are not so active. This is why ACN is once again planning to help around 200 sick people in the capital, through the intermediary of Sister Joseph Marie, so that they can get hold of the medication and treatment they urgently require.

And since chemists and drugstores have fewer and fewer products available, Sister Joseph-Marie encourages her teams to build up reserves of the necessary medicines for something like 3 to 4 months in advance. At present they have enough in reserve to last until October. But sadly, she tells us, the number of people suffering from cancer “is growing at a terrible rate among younger and middle-aged people” and to her profound regret “there is very little help for them”.