Syria: Between war planes and Coronavirus

Interview with Mgrs. Nidal Thomas: “We are not afraid, but we don’t know what the future holds for us.”

More than 20,000 Christian families lived before the war in the Al-Jazeera region, on the border with Turkey in east-northern Syria. Many of them are the descendants of those who came seeking refuge fleeing the genocide of the Armenians in 1915 or Kurdish attacks in the neighboring Iraqi area of ​​Duhok in 1933. Today, although it is difficult to give figures because a census has not been conducted, an estimated 7,000 – 8,000 families remain.

Three bishops still have their headquarters in this area – also named Hassake Governorate – they are the representatives of the Syrian Orthodox, the Armenian Orthodox and the Assyrians.  Some thirty priests of different Christian denominations are serving the Chaldean, Armenian Orthodox, Armenian Catholics, Syrian Catholics, Syrian Orthodox and Assyrian Christians who remain in their land.One of them is Monsignor Nidal Thomas, Vicar of the Chaldean Church in Al-Jazeera. Aid to the Church in Need, which has helped Christians in Hassake Governorate with different programs in more than nine years of conflicts in the region, talks to the priest about the current situation in the region.

The status of Christians is the same as other religious in the area, Muslims and others. Because of Covid, everyone is staying at home. Shops are closed. The living situations are very difficult because most people are self-employed. Christians must spend a lot of their income on food and other necessities and are currently suffering from financial hardships. Price increases create a lot of problems, in addition to the scarcity of some basic materials. Gas, fuel, bread and electricity are available, and their prices have not increased during the Corona crisis as other materials. 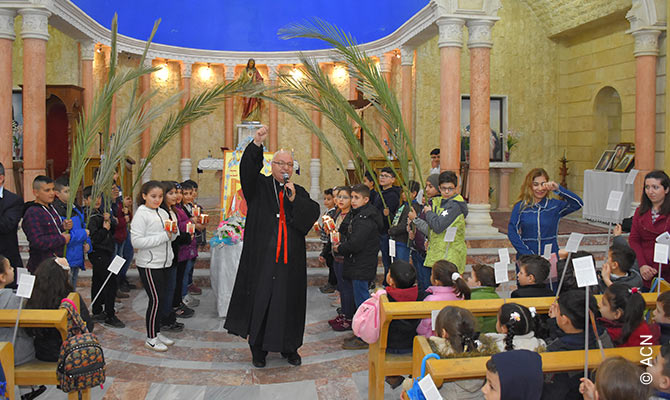 Monsignor Nidal Thomas, Vicar of the Chaldean Church in Al-Jazeera.

Is the region affected by the coronavirus?

The local authorities have imposed a curfew, and everybody is respecting it. People are staying at home and go at certain times to shop for necessities. There are no reports of Covid-19 infections.

Are they able to bring their children to school?

Now with the Coronavirus, all schools are closed. Some private schools – all affiliated with the denominations – are helping with the payment of yearly tuition fees; others have increased the tuition without mercy. Private lessons for the 9th and 12th grade are common, and the teachers are taking advantage of the situation and raising the prices for each subject taught to 1 million Syrian Pounds (nearly 1000 USD per subject).

Before the Coronavirus pandemic, only Christians schools were working because 90 percent of the state schools are controlled by the Kurds and they transformed them into military bases. Christian Schools accept Kurds and Muslim students because the percentage of the Christian students are about 10%. Even the educational staff is mixed: Kurdish, Muslims and Christians.

Are there still attacks?

There are still attacks in Ras-Alain, the suburbs of Qamishli, Al-Hassakeh and Malikiya. The Kurds, the Russians, the Americans, the Turks, Hezbollah and the coalition forces are harassing everybody. War planes continue to fill the skies especially above the prisons full of Muslim extremists guarded by Kurdish Militia. The attacks don’t stop; only two or three consecutive days per week have gone by calmly since the Corona outbreak.

Is there still some threat to the Christians’ lives?

There is no threat. On the contrary, the state strives to stand beside the Christians and the Church is respected by it, and also by the Kurds, except for some very few violations.  We are not afraid, but we don’t know what the future holds for us.

Can Christians show their presence with no fear?

Christians are loved in the region, especially since the humanitarian organizations are all Christians, and provide eighty percent of the aid to Muslims. Going to churches, ringing bells is possible as it was always. This has never changed. Christians enjoy a lot of respect. Nothing has changed for the Christian way of life.

Are Christians returning to this region of Syria? Do Christians want to stay here in their villages?

Not at all. Nearly all Christian villages are empty except for one village with Assyrian residents. Lots of families have left the country and their relatives want to leave and join them. Some Syrian farmers come briefly from Europe to plant or harvest their crops and go back to Europe.

More generally: How is the relationship with Kurdish government?

The relationship with the Kurdish government is good, given that there is the Christian Sutoro Armed Forces (mostly Syriac) working with them, except for some violations by the Bedouin soldiers that work with the authorities.