Survived nine years of war – now going to be killed by a virus?

The Syrians in general, but especially those living in Aleppo, tend to be more careless in regard to their personal safety and security than most people in the European countries. “Many of them say they have suffered for nine years and survived both warfare and hunger. Some people are more careful and use and sterilisers, surgical masks, antiseptics and safety gloves to protect themselves, but most people aren’t concerned about the spread of coronavirus. They have already suffered so much…”, explains the Armenian Catholic priest Father Antoine Tahhan to the international Catholic pastoral charity and pontifical foundation ACN.

On 19 March the Syrian government issued an order to close all the shops for fear of spreading the Coronavirus and imposed a night-time curfew from 6 PM until 6 AM. Just a few days later, on 22 March the Catholic bishops in Aleppo additionally decided to close all their churches in order to protect the faithful and prevent the spread of the pandemic. Since then Father Antoine has been coming and going every morning to the Armenian Catholic church of the Holy Cross in Aleppo to celebrate Holy Mass, and then returning home afterwards in order to comply with the social isolation measures.

But there is little that can be done in a country like this after a war that has left the health system in tatters. “Aleppo has lost many hospitals and health centres, destroyed by the terrorists, for example the Al-Kindi hospital and the ophthalmic hospital. Much of the equipment and medical supplies have been looted, and many doctors have emigrated because the terrorists have abducted some of them or threatened to kill others. As a result, the healthcare system is in a fragile state and this is at the root of the concern that the virus could spread among the population, especially among the Syrian Arab soldiers”, says Father Antoine.

“I don’t think there are enough ventilators in the hospitals, especially in the intensive care units, to be able to cope with the virus. We also need a great many surgical masks, sterilising equipment and other medical equipment. At the same time, however we need to raise awareness among the people about the health risks, since up till now there are still many people walking through the parks, holding hands or greeting one another without taking any notice of the recommended public health measures.” 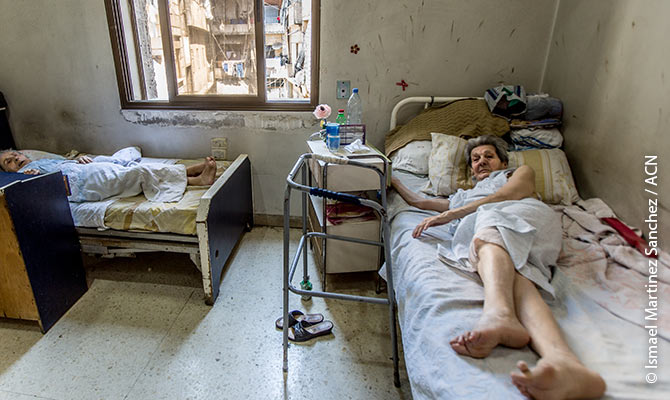 Syria: We have survived nine years of war – are we now going to be killed by a virus?

Aleppo was liberated on 24 December 2016. A few of the better-off families have since been able to repair their homes, but the majority of the Christian families are very poor and are surviving thanks to the support of the local Church and with the help of organisations like ACN, which have established emergency aid programmes to help with rent, food and basic medical care for many of the poorest families in Aleppo and other parts of Syria. “Without this help the Christians would not be able to return to their homes and preserve the Christian presence in the Middle East”- assures the priest.

The exodus caused by the war has had a devastating effect, Father Antoine explains. “The number of Christian families, of all denominations, living in Aleppo before the war was around 30,000. Now that figure has fallen to around 10,000. In addition, we are suffering a massive ageing of the population in the sense that the number of older people has increased to two thirds of the population, not merely in Aleppo but throughout Syria. And the lack of a youthful workforce is further exacerbated on account of military service.”

For over a year now Syria has been suffering a terrible economic crisis. “When Aleppo was liberated, there was considerable optimism and for three years many people put their hopes in hard work, but now the economic situation is generally going from bad to worse. Many people are unemployed, and the salaries paid are not enough to support a family of four. Economic sanctions are causing great suffering to the population and the poor economic situation in Lebanon is also affecting the Syrian economy. The dollar has gone through the roof, and with it the cost of living. At the same time, they have suspended the aid that was coming into Syria via Lebanon”,  explains Father Antoine to ACN.

Since the liberation of Aleppo, 75 Armenian Catholic families have returned, but they are displaced people from other parts of Syria and not from Europe. “In order to encourage the families to return to Syria we need to lift the economic sanctions – as the Pope has called for in his Easter message – and help the young people to find work. We also need security, medical assistance and the abolition of the military reserve, so that the young can get work, build their future and found families”, Father Antoine concludes.

The coronavirus is yet one more concern among so many others, but this global pandemic is causing the Syrian people above all to fear the economic consequences which, on the one hand can only further aggravate the calvary they are already going through and on the other may well cause a reduction in the emergency aid programmes that are now more than ever necessary for their survival.